The sound of the buzzer, the cheering of the crowd, the exhausted satisfaction at the end of a long meet or tournament: this is what athletes work for.

Competition is what gives athletes purpose. During their seasons, all the hard work of practice is dedicated to the next game, the next match, the next meet.

But when the season ends, when the competitive elements are off the table, many Pepperdine student athletes said they lack focus, feel listless or are downright bored. They struggle to keep the same level of purpose in offseason as they do inseason.

“We strive to win,” said Colby Harriman, sophomore international business major and volleyball player. “That’s what makes every athlete love their sport. That’s the fun part. It makes every early morning practice or lift, every hour spent on buses to games, and every sacrifice we make for our sport worth it.”

Offseason is when official games, meets or tournaments are not being played. Student athletes still practice, but they report having more issues with academic schedules, their motivation to train and team camaraderie.

Student-athletes see their sport as an identity

Participating in a collegiate sport is comparable to having a part-time job, Academic Coordinator Adi Conlogue said. Inseason, athletes are expected to be ready to train as early as 5 a.m. and spend up to four hours a day at practice. This does not include traveling for competitions. Being a student-athlete also comes with exhaustion, soreness and the chance of a sport-related injury.

“Doing a sport requires the majority of my time and energy, and I have to make a lot of sacrifices in order to participate 100 percent on the team,” said Hannah Dibona, freshman business major and track team member. “I would rather keep doing it than let it go, though. It’s worth it.”

Despite the blood, sweat and tears, many athletes said they would not give up their sport for anything. While it adds stress and pain to the life of a college student, it also builds community and comfort.

“I don’t know what I would do if I didn’t play a sport in college,” said Michael Fisher, freshman sport administration major and volleyball player. “I guess I could join a fraternity, but I don’t think it’s the same thing. I love having something that can give you competition, exercise and a family all in one. Volleyball is definitely a huge part of me.”

A Pepp Post poll of 52 student-athletes found that about 96 percent of athletes are most enthusiastic about their sport inseason, while only about 4 percent are more enthusiastic during offseason. 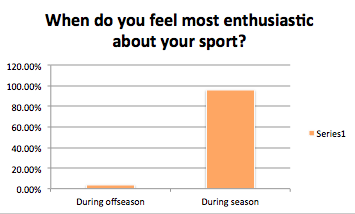 The struggle to stay motivated 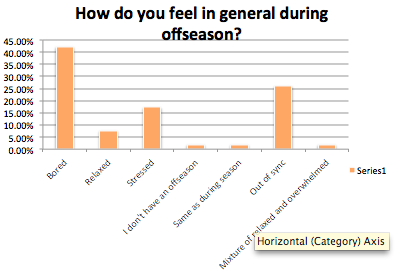 Most Pepperdine teams still practice, but the National Collegiate Athletic Association only allows teams to practice eight regulated hours a week, Compliance Coordinator Thad Satre said. Athletes may still practice voluntarily by themselves, but they cannot report back to their coaches or have them present.

Despite being less frequent, most offseason practices are harder. This is frustrating for many athletes because they are expected to work harder, but don’t have competitions to look forward to or work toward.

“Offseason is a super tough time because we’re not even working toward meets yet,” Dibona said. “It’s really hard to stay motivated when you can’t see the hard work paying off.”

For people who compete for fun, not having competitions changes the purpose and intensity of training for athletes.

“During offseason, there’s often not a lot of motivation during practice and people are sort of dragging,” said Michael Mahony, freshman business major and baseball player. “Practices are much harder, and it’s a grind. I definitely enjoy being inseason better. We wake up excited to play and to get going because we have a reason to compete. We know what we’re working for.”

Mahony’s teammate, Jacob Doty, agreed, explaining that competition gives him the most passion for his sport.

“During season you know it’s go time,” Doty, a freshman business major, said.  “It’s so much more exciting when you can look forward to competition because that’s what I really enjoy about the game.”

Besides the difficulty to stay motivated, it is common for student-athletes to feel less like a team as well. While athletes do what they can to support each other during practice, there is less camaraderie when there is a lack of competition.

“We still have a couple games during offseason, but they don’t really count as much,” said Kenneth Keller, sophomore business major and water polo player. “I feel like the offseason is a time to lay low and I’m far more excited to play games competitively inseason. Offseason doesn’t really assess a team’s compatibility either because everyone is not as invested as when we are inseason. Competing together is a huge bonding experience, so I don’t like not having that in offseason.”

Offseason can also affect academics. When practices and competitions are significantly less often, one might assume that academics are easier during offseason. The case is actually the opposite for many.

Student-athletes are so used to micro-managing their time to balance classes, practices and games. Many of them are used to their routine, which includes eating, sleeping, studying and training, and changing one aspect of this schedule can cause an unbalance, students said.

“I think I’m so used to getting my homework done in the little time I usually have, so whenever we have more time on offseason I procrastinate more,” Fisher said. “I spend more time sleeping and wasting time, because I convince myself that I have a bunch of time to do my work, but it really just stresses me out more.”

“Almost every student-athlete I’ve talked to is more stressed out during offseason,” said Adam Estrin, assistant strength and conditioning coach for women’s tennis, cross country, track, and women’s swim and dive. “They’re trying to focus on schoolwork more and there’s less practice which means less of an outlet to release the stress and really get after a workout.”

The Pepp Post poll found that about 65 percent of student athletes spend the majority of their offseason free time sleeping more, while about 23 percent spend their time studying more. The remaining 12 percent participate in a combination of training on their own, working and spending time with friends. 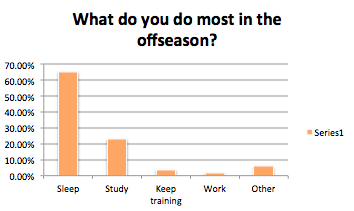 Offseason can certainly offer student-athletes more of a chance to spend time with their friends and relaxing. However, most student-athletes divide their free time between more sleep and more studying.

“In my experience, offseason is an overlooked period of recovery,” rehabilitation coordinator Katherine Sniffen said. “I think it should be looked at as a time to recover, get back on your feet, and be ready to compete next season. I understand that many athletes feel out-of-sync, but they don’t have to look at it that way. It is a chance to get your mind and body right to come back stronger next season.”

One of the top Pepperdine University stereotypes doesn’t live up to the hype: Not all students are conservative Republicans. Students and outsiders believe Pepperdine is predominately conservative. However, a Pepp Post survey of 78 students […]

It’s hard work, and we need to recognize all the hard work they put into bringing us the fruits and veggies and the work they do and they deserve our respect and the right […]